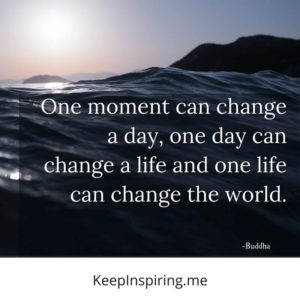 When I was a kid I dreamed that I would do something to change the world. I wanted to be one of the first female astronauts or I wanted to create a new type of math (I knew it would be called “subvision’ but didn’t get a lot further than that).

Somewhere along the way I got an inkling that those things would never happen. Strangely, my debilitating fear of heights and poor math skills never deterred me in either goal…..I was still forging forward.

At ten years, old (you know…. when I was creating new mathematical formulas), I didn’t really know what changing the world meant. Now I do.

I first met Jody Day while walking into a Cleveland hotel. We were both in town for the Not Mom Summit. She was the keynote speaker and I was the lunatic fan who ran up to her like she was one of the Beatles. For many years I had been overcome by grief…..feeling like I was immersed in pudding, drowning more every day. Then her book arrived.

Welcome. Pull up a chair.

Grab yourself a cup of tea or something stronger and make yourself comfortable.

Things are about to get a whole lot easier – Jody Day 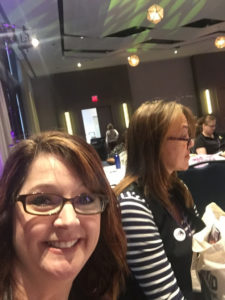 Stalking Jody without her knowledge

The morning of her keynote she came to sit at our table. (Craig warned me to “be cool and don’t act like a goofball when you meet her”). I think Exhibit A Stalking Picture proves I didn’t listen.

She started her keynote and the room went silent. Her reputation is well known as someone who started speaking for the childless when no one else was. We were all anxious to hear what she had to say.

The numbers are staggering. Twenty percent of the women in the US will make it to their 40’s without having children. Jody acknowledged the heartbreak. “Yep. This sucks. It really, really sucks”. But then she asked the game changer. Very simply. “What’s next?” How did we want to live our lives?

Back then, I hadn’t gotten that far, honestly. I was still knee deep in refusing-to-acknowledge-cry-on-the-inside-like-a-winner grief. But, I’ll bite. How DO I want to live my life? Was the baby story going to be my only story? Was that my legacy?

She acknowledged that unwanted childlessness was painful and horrible… but she went far beyond that.

Those in the room looked around inquisitively. What!? Wait. What is happening? We had all been focusing on our individual internal grief (as we should have been) that we never even realized what was happening to the collective “us”. As a society, are childless women treated differently? Do company policies uniformly impact their employees or do they lean toward benefitting those with children? She tossed out a few examples that most had never considered. Unfair utilization of PTO? Are benefits equal? Does a company contribute more money toward healthcare for a family than they do for a childless person. Is that right?

This really got those in the room spinning. Nahhhhh, this isn’t a thing, is it!?

The story, all names and characters, and incidents portrayed in this production are fictitious. No identification with actual persons (living or deceased), places, building or products is intended or should be inferred. <ha! This is what they put after Law & Order.

Who is a better employee? Susie or Jamie? They’ve both missed the same amount of hours. Both of their projects are falling behind. But does your company’s leadership or the office gossipers consider these scenarios to be the same? Or….is Susie a “working mom trying to take care of her kids ” and Jamie is considered “self-centered and not a team player”.

Huh. Not really the same, is it. Is it more socially acceptable to ask co-workers to donate to a baby gift as opposed to donating to another co-worker’s dream vacation fund? In fact, in some places (every southern place I’ve ever been) it would be considered tacky.

This conversation is about awareness and action. Things like the above are happening in our workplaces and it is up to us to stop it. Because we now know that childless women may get treated differently…..(In all fairness, companies may not even realize it….which is why we need to talk about it.)

This conversation is NOT about asking people to donate to childless women. If you believe it is, then either you missed the entire point or I explained it poorly. Over the years, I’ve happily donated to a zillion baby showers and bridal showers and will continue to do it. 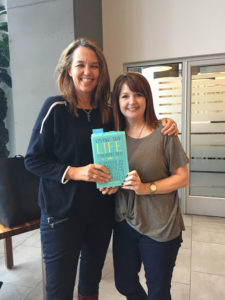 The Day who changed the world

Early next year, I will join 9 other women from around the world where Jody will teach us to facilitate her Gateway-Women’s Reignite workshop. This is the same workshop I attended in February and experienced the 10 most powerful minutes of my life. This workshop had a massive impact on me and helped remove the heavy feeling I had for so long (like drowning in pudding)…and now, she wants to expand the reach and by extension, the healing. She is giving us a chance to impact other women’s lives. THIS will be our legacy.

Gateway-Women.com describes Jody Day as the Voice of the Childless in the UK. She is much more than that. She is changing the world. And, she is a pudding remover. That is a big deal, people!

I find myself getting immersed again…but this time, not pudding….but in the excitement of Living. This. Life. The childless life.

For more information about the Reignite Workshops or the NEWLY launched Baton Rouge Childless Women Meet Up (1st Saturday of every month), visit Gateway-Women.com.