A few years ago I gave my brother some juggling bowling pins for his birthday. Yes, we are weird like that. But I knew he could instantly pick them up and juggle like he had been doing it for years. I was right. Smooth movements, kept them in the air. Me!? I almost hurt myself just trying to wrap them.

Throughout the infertility/adoption process we met with an endless number of doctors, specialists, therapists, etc. Appointments, rescheduling, testings, appointments, etc. I can’t count the number of waiting rooms I’ve sat in…waiting to hear my name called….waiting to hear test results…waiting for someone to get all up in my lady biz-ness.  Everything was in a hurry. Then we’d wait. Then hurry. Then wait. This person was supposed to talk to that insurance company, while the other person was trying to get me in to see that person. Freaking three ringed circus. In the middle of all of it, though, I felt alone.

The silence after the appointments are over is deafening. Loneliness creeps in. For whatever reason, Craig and I didn’t share a lot about our struggles with other people. Now that I finally am talking about it, it is difficult to explain why we didn’t back then. It wasn’t a conscious decision.

It didn’t matter though. I could have talked with every person on this planet and still felt alone. It’s strange how trying to build another human being can be such a lonely process.

People’s questions and comments about trying to get pregnant often cut me to the core. No one ever meant to be hurtful. But one question at dinner, another question while at a party, another while on the phone, etc…..after a while I wanted to avoid the conversations. Because I felt like there was a huge sign pointing to me. ——> STEP RIGHT UP AND SEE THE BROKEN WOMAN RIGHT HERE!

When you are the only one in your world wearing a formal gown and flippers, you stand out.

During that time we were trying to survive the heartbreak of infertility, the roller coaster of treatments and a lot of 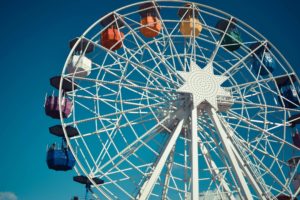 other overused imagery phrases. Throw adoption classes in there and we were on a never ending merry go round. (ok. that was the last circus reference).

We never planned to the treatment and adoption discussions private…but we also never discussed how we’d communicate any of that. There were only two goals. Getting a baby. And keeping the bowling pins in the air.

« Do you need a knife for cereal?
Happy Lupercalia Day! Prepare the goat hide! »