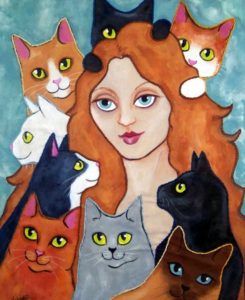 When did the cat lady become a thing? And why is it synonymous with older woman without a child?

In a previous post I shared my experience at the Gateway-Women’s Reignite Retreat where I met with 12 other childless women from around the country. The first day of the retreat was gut wrenching but important. On the second day we each created a plan to thrive in our life as opposed to just “existing” – even though we were each living in this, the unexpected and undesired normal. We also addressed the stigma of childlessness that we all know exists…but don’t talk about. And how as someone ages it gets worse. And cruel.

The older, childless female characters in Disney movies aren’t even shown in a positive light. Maleficint, the evil queen from Snow White, Ursula from the Little Mermaid, the witch in Hansel and Gretel, Cruella de vil, etc. What do they all have in common? Older, single, childless women. <Me, trying to think of an older Disney character who has kids> Oh! Cinderella’s stepmother has daughters.  AUGH!! SHE IS EVIL TOO! See what I mean!?

You’ve cat to be kitten me right meow.

I am not on a rant. I don’t even own a cat. It’s just a strange phenomenon that I could never get my arms around…..but it seems that the mere existence of Whiskers changes the game.

Forget Disney movies. Moving forward I plan to be less Cruella and more Sigourney Weaver’s character “Ripley from Aliens”. An older, childless woman who kicks ass and saves the world. And OMG. She has a cat.

« Mother’s Day: The Voldemort of holidays.
Foot in mouth….the moron’s definition of a family »